In my eight years as a U.S. Army chaplain, the Lord has helped me shorten the space between my warriors, their families, and God. This has been regardless of gender / sexual orientation, race / ethnicity, temperament / personal attributes or impairments, cultural, age or religion.

This reminds me of the Engel Scale:
“The Engel Scale was developed by James F. Engel as a way of representing the journey from no knowledge of God through to spiritual maturity as a Christian believer. The model is used by some Christians to emphasize the process of conversion, and the various decision-making steps that a person goes through before they become a Christian.”
(A. Scott Moreau, Harold A. Netland, Charles Edward van Engen, David Burnett Evangelical Dictionary of World Mission, http://en.wikipedia.org/wiki/Engel_Scale) 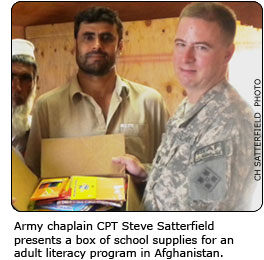 In my first active duty unit, the 68th Corps Support Battalion at Ft. Carson, Colorado, the space was shortened by several things. The Lord let me lead a family conference, which helped people get closer to each other and to Christ. Provider and Prussman Chapels were where the Lord let me preach and help people grow in their relationship with Jesus.

My unit deployed to Kuwait for a year. Preaching there was another chance to help people with their spiritual growth, as well as using the Alpha Course for discipleship, and living our lives the way the Lord wants.

My second active duty station was the 2d Military Intelligence Battalion in Darmstadt, Germany. The Lord let me lead singles’ and family conferences there, which once again helped people get closer to each other and to Christ.

God also opened the doors for me to preach at the Kelley and Cambrai Fritsch Kaserne Chapels. The Army sent me to Baghdad for four months, where I assisted in worship services and helped our deployed warriors in their relationships.

My current unit is the 4th Brigade Special Troops Battalion from Ft. Carson. While we were in Colorado, the Lord once again let me lead singles’ and family conferences in the beauty of the Colorado mountains. I also helped lead worship in Prussman Chapel is. We are currently in Afghanistan for a year. Here, the Lord lets me lead a small congregation and visit our warriors throughout East Afghanistan.

In all my units, the space between my chaplain assistant and me has shortened, as well as the space between us and those in command and on staff. Individual counseling sessions with warriors is another way the Lord allows people to grow closer to those they love, and to Jesus.

In the future, prayerfully, I will be a Family Life Chaplain (licensed Marriage and Family Therapist), then I will be able to have more impact on individuals and families, as I am able to spend more time with them working on their challenges.

I will continue to offer hope, as I “nurture the living, care for the wounded, and honor the dead, for God and Country” (the Army Chaplain Corps motto).