General Riley wrote these thoughts as he flew home from this sacred mission in July 2008.

I am presently returning to DC in a Blackhawk helicopter from a mission at Dover Air Force Base on the coast of Delaware. I thought I would describe to you how we welcomed home five of our fallen heroes. 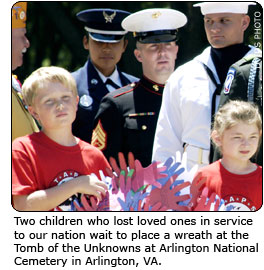 The Army designates a General Officer to meet every airplane that returns home carrying the remains of our Soldiers-a “repatriation of remains.”

I received the duty and honor today, getting the call early this morning as the contract Boeing 747 lifted off from Ramstein Airbase in Germany, with the remains of five soldiers killed in Iraq this past weekend.

We quickly arranged for the helicopter to take the Army Honor Guard (from the Old Guard, the unit that guards the Tomb of the Unknown) and me to Dover where we arrived to greet the plane.

As we waited, the Air Force Honor Guard mounted the arriving airplane, ensured a new and unblemished American flag was draped and secured properly over each “transfer case” (not yet a casket); and then loaded them individually, in a slow and dignified manner, on to a loader to lower them to the tarmac.

The Commander and I then returned, in step, to the tarmac where the Army Honor Guard was waiting.

As we all stood at attention, the Honor Guard moved to lift each case. At this time the Commander and I saluted (ceremoniously-a slow, three-second move) as they moved the case to the open doors of the hearse. We did this for each soldier being honored.

Then one last salute as the hearse started to drive away.

We all then followed, in step, the slow moving hearses back towards the morgue where they will process the soldiers’ remains for transport home to their final resting places. Further, when the cases arrive and depart the morgue, all the morgue workers come outside to stand at attention and salute as appropriate.

The deceased were all from the same company in 1st Battalion, 8th Infantry Regiment, 4th Infantry Division and were killed by an IED attack and ambush last weekend.

There were no media, no family present (although they are welcome, few come, as I suspect they are both grieving and preparing for the homecoming), no cameras, and no outside viewers allowed. It is a brief and small, but most dignified gesture to honor the fallen.

The men and women at Dover are impressive, and they carry a large burden on their spirits for the nation, as they see this all too often.

When I get back to the office I’ll write down, as I have for past missions, the names of those I welcomed home on a small card and place it in my notebook. I don’t want to lose their memory, nor do I want to forget the honor I have to participate in this mission.

We don’t know why their lives were taken so early, but we do know why they served-because they were called by their country and they answered the call.

They served, knowing they would see danger and they would be away from family and home, but they did it selflessly.

Please pray for their families and friends back home, that God will comfort them in their sorrow, knowing that these five soldiers did their duty well.