The Ultimate Freedom of an Uncaged Eagle

Editor’s note: Victory over adversity. It’s something Dick Toliver knows well, this great-grandson of a slave, who grew up in dark days of the pre-civil-rights-era South. Despite the shackles of poverty, racism, injustice-even escaping one night with his family from the murderous intents of the Ku Klux Klan-he fought to become a highly decorated and accomplished Air Force pilot. And yet…as he pens in his autobiography Uncaged Eagle, “ultimate victory over adversity is only possible when freedom is gained from the deeper, inner emotional cage.” This is the story of Dick Toliver’s ultimate victory-his eternal salvation.

My struggle to excel and become one of the best officers in the Air Force exceeded thirteen years. Ten of those were spent doing everything possible to be counted among the top fighter pilots in the operational commands. I fought against racial attitudes, misperceptions, and ingrained stereotypical views of African Americans.

I bristled at the notion that my presence in the highly competitive arena of fighter pilots was a “token” to prevent adverse publicity. My reaction was hostile and swift to those who believed I should be more gracious and humble for their acceptance of me.  The roadblock in 1976 to an assignment to Bitburg AB, Germany nearly broke my resolve to continue the fight. The resulting depression was so great it adversely affected my relationship with [my wife] Peggy, Mom, and the children. I desperately needed help but was still too proud to seek it. 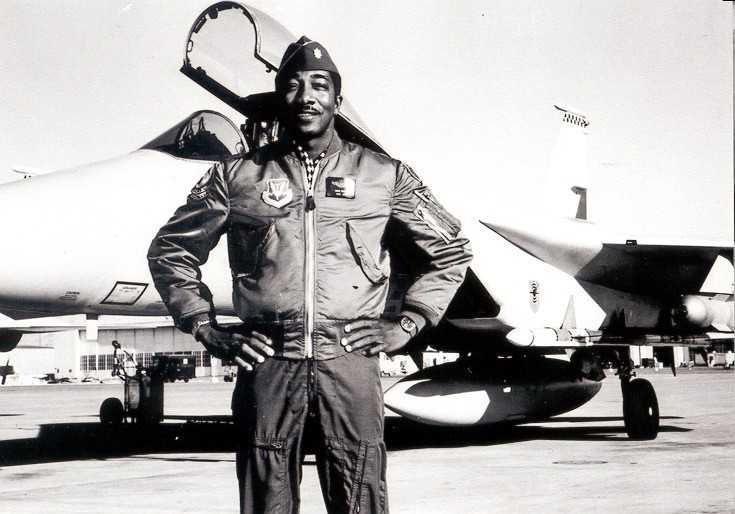 The last of the so-called “Dog Days” in the Valley of the Sun were ushered out by unusual thundershowers each night. The sky cleared by early morning, and the weather was perfect for flying. Such was the early morning on September 10, 1976 when I went out to fly the F-15 Eagle.

Suddenly, my aircraft was struck by a horrendous flash of light and a deafening explosion that rocked the aircraft and blinded me temporarily. I was totally disoriented for several seconds. After losing several thousand feet of altitude, my head cleared and I recovered the aircraft. Nothing in my twelve years of aviation experience matched this event that occurred in clear air void of any visible weather.

Eventually, I landed the F-15 safely.  After much discussion it was postulated I had encountered a freak lightning strike and was lucky to be alive.

Later, while recovering in the squadron, I was overcome by a powerful spiritual presence that seemed to demand a long-evaded accounting for my attitude and behavior. A voice seemed to speak to me quietly, yet it appeared loud enough to be heard throughout the universe:

There was no escaping this time. My “credit card” [with God] was woefully overdrawn! With fear and trembling, I headed home. To this day, I do not know how I got there.  Peggy met me at the door and was startled by my inability to speak. She assisted me to the bedroom, took off my boots, and I fell across the bed.  At the urging of her mother, Peggy left me alone in the room and closed the door.

In the deep recesses of my brain, I remembered the biblical story about the Apostle Paul, who had been a fire-breathing zealot traveling throughout Israel persecuting Christian Jews. On the road to Damascus…struck by a blinding light, Paul heard the voice of Jesus…a day of reckoning that changed his life forever.

I experienced a “Damascus Road” event that day at 20,000 feet and it had a similar affect on my life.

For the next several hours, a dramatic phenomenon took place. I was put on trial for the way my life had been lived in recent years. My actions, attitudes, behavior and thinking were in stark contrast to the many blessings God had showered upon me.

In my zealous pursuit to become a super fighter pilot, I had strayed far from the path of righteousness. My conscience was obscured by open rebellion and unbridled vanity. Excelling in my job had become my idolatry and obsession. My speech had become callus and profane, and I frequently hurt those closest to me. Too often I allowed the frustrations of the job to come home with me; and my daily retreat to the booze closet approached alcohol abuse.

To outsiders, the relationship with my wife and family appeared normal; but behind closed doors there was serious trouble in my home. My relationship with the children was especially strained. Even the pet dog avoided me.

The evidence against me went back farther than I wanted to admit. I cringed in shame, but the “Prosecutor” illuminated my sins with glee. The trial continued for hours, and I lost awareness of my physical surroundings. However, my consciousness of the transgressions was real.

I was guilty as charged, convicted, and about to be sentenced to spiritual death when a “Presence” entered the room. I looked up through the tears of a distraught soul. The Presence stood in my defense. Incredibly, a message burned into my memory when I was a youth emerged-from a picture of Jesus standing at a door:

“Behold, I stand at the door and knock. If any man hears my voice and opens the door, I will come to him and eat with him, and he with me…” (Revelation 3:20).

I don’t know when the trial ended, but the hand of Jesus reached down and grasped my outstretched hands. I was delivered from the door of hell and placed on the solid ground of redemption. With the Lord’s help, I wanted to change my attitude, behavior, and my life.

I was saved from spiritual death and vowed to do everything possible to walk the way of a Christian. Through God’s grace and mercy, I was determined to become a new man.  When I got up to go to the bathroom, the face that stared back at me had been missing for over ten years! The Dick Toliver that stared back had just experienced a spiritual rebirth!

To outsiders, the relationship with my wife and family appeared normal; but behind closed doors there was serious trouble in my home. My relationship with the children was especially strained. Even the pet dog avoided me.

My spiritual wings were just starting to develop when I arrived at Ramstein, Germany, and God already had a support group to come along beside me. Dave Jaquish, my first Christian fighter pilot role model, introduced me to the local OCF Bible study group, and I began attending weekly. Dave also introduced me to Colonel Clifford “Bud” Henning and his wife, Marie, and Major Charles “Bucky” Dunn and his wife, Dale. Bud was a director on the USAFE staff. He held a weekly Bible study during lunch and taught adult Sunday school at the base chapel. Bud invited me to attend both, and I agreed to do so. This incredible group of Christians welcomed me with open arms and treated me like family.

Later that spring, OCF held a European conference at Ramstein AB, Germany. The Executive Director, Paul Pettijohn, led a group that included retired Lieutenant Colonel Ward Graham, a former U-2 pilot, and Mr. C.N. Tokatloglou, a five-foot, two-inch spiritual giant. The participants varied in rank from general officer to lieutenant, and the teaching and fellowship was the greatest I had ever experienced.

I was particularly moved by the commitment and dedication of these Christian officers and their wives who were not afraid to demonstrate their faith. I left the conference remembering the late Guy Pulliam at Nellis.  Being a top fighter pilot and Christian was indeed possible, and I was grateful for the great examples I met that weekend.

ABOUT THE BOOK: Uncaged Eagle can be purchased by visiting Col. Toliver’s website, or you can call the OCF home office at 1-800-424-1984.

ABOUT COL. TOLIVER: Dick, a protégé of the famed Tuskegee Airmen, retired from the Air Force in 1989 after serving twenty-six-years. A “Top Gun” fighter pilot who flew 446 combat missions in Southeast Asia, he also directed the testing and evaluation of several major weapon systems and had key roles in tactical fighter aircraft research, development, and testing. In demand as a motivational speaker throughout the world, Dick held a key role in securing the Congressional Gold Medal for the Tuskegee Airmen.