As the sun comes up on Easter morning, can there be a better place to celebrate than in front of an empty tomb—the one where Jesus might very well have been laid to rest after His crucifixion? 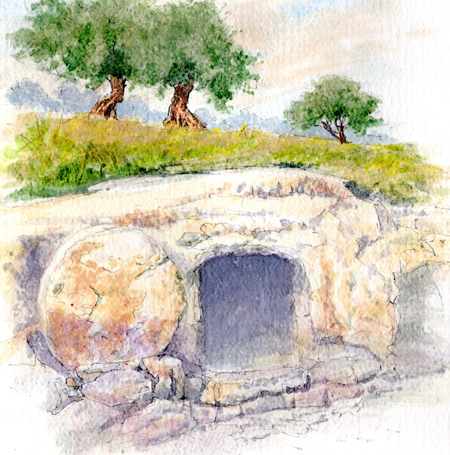 Go back in time as we explore the places and events, through the lens of Scripture, shaping the most dramatic event in the history of the world—the death and resurrection of Jesus Christ.

From the empty tomb, we walk two hundred yards to the east, where the image of a skull face eerily peers out from among the juts and gaps of stone in the rocky hillside. Is this indeed Golgotha (literally meaning “the place of the skull”) where Jesus was crucified? It’s a place suitable for maximum public humiliation, located by a busy intersection just a short walk north of the Damascus Gate into the Old City of Jerusalem. It’s the certain location where Stephen was later martyred (Acts 7:57-58).

Imagine the stunning scene playing out, where the throng at the crowded crossroads is throwing scorn and insult at our crucified Lord, dying an unimaginably excruciating death. Now so contaminated by our sin, no longer in fellowship with His Father, Jesus cries out in abandonment and agony, “My God, my God, why have you forsaken me?” (Mark 15:34). The earth shakes violently and the temple curtain is torn in half as our Lord dies. And the Roman centurion, who cared for his career and not for the new sect led by this prisoner, now cries out in terror, “Surely He was the Son of God!”

Joseph of Arimathea, a wealthy man, carries Jesus’ body 200 yards to the west, through the garden he owns, and places Him in an unused tomb hewn out of the rock. Nicodemus, a secret believer in Jesus though a member of the Sanhedrin, assists him. A stone is rolled across the entrance of the tomb, sealed, and then guarded by Roman soldiers.

Ponder that morning of the third day as Mary Magdalene, Mary the mother of James, and Salome bring spices to anoint Jesus’ body, wondering who will move the stone. “While they were wondering about this, suddenly two men in clothes that gleamed like lightning stood beside them. In their fright the women bowed down with their faces to the ground, but the men said to them, ‘Why do you look for the living among the dead? He is not here; he has risen!’ ” (Luke 24:4-6).

Later, Peter and John run to the burial site, only to see Christ’s grave clothes lying there in the empty tomb.

Did they believe what they saw? Do we really grasp it? The stone of Jesus’ grave was not rolled aside to let Him out. It was rolled aside so that all of us throughout the ages could look in and see an empty tomb—that Jesus is alive, the ultimate victor over sin, death, and the grave.

This is the core of the Christian faith: Jesus’ death and resurrection. And because He rose again, those of us who believe and put our trust in Him, even though we die, will be raised to eternal life with Him. And without the resurrection of Christ, as Paul argued to the church at Corinth, “If Christ has not been raised, your faith is futile; you are still in your sins…If only for this life we have hope in Christ, we are of all people most to be pitied” (1 Corinthians 15:16-19).

Here in this corner of East Jerusalem is the perfect visual image of the Lord’s crucifixion and resurrection. Known as the Garden Tomb, it’s been owned and operated by a British charity since 1894. Rosalind and I have not been called here to guard a relic, a religious site. The stones have no mystical properties; prayer here is no more effective than where you celebrate Easter.

It matters little if this is the right place on your Satnav device because the importance of the Garden Tomb is not declaring the place but the person of Easter—Jesus Christ. And that is what we tell the quarter of a million people who visit this place every year.

Richard is the director of the Garden Tomb in Jerusalem, Israel, and lives with his wife, Army Captain Rosalind, on the site (but not in the tomb). A Navy Captain, Richard served thirty years in the British Royal Navy and ten years with Christian Vision for Men. The Meryons have lived in the U.S., including Virginia Beach while Richard worked with NATO, and were regular speakers and counselors at OCF’s White Sulphur Springs conference center in Pennsylvania. They have three children.

Since OCF's inception, both the heart and the back

"Loved how Christ-focused it was and how our activ

No matter where the Lord calls us to lead, we do w