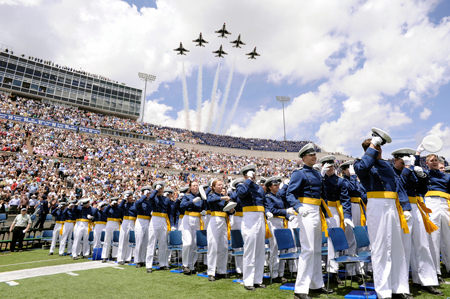 When’s the last time you had more than an hour—thirty minutes— to yourself to be still? And not napping, catching a movie, or having a quiet dinner with your spouse, but an uninterrupted period of time just enjoying being in the presence of the Lord?

Last summer I took part in OCF’s Rocky Mountain High outdoor leadership program. After a two-day trek, on the eve of summiting a 14er in the Rockies, we reached timberline. This marks the time and place where everyone stops—to catch their breath and take time to be quiet and listen to God.

Freeing myself of my loaded backpack, I separated from my fellow hikers and sought solitude, finding a place among the outcropping of rocks to sit. From this vantage point, I was moved by God’s splendor and majesty in His creation– a stunning waterfall to my left and to my right, an unobstructed view of the Rocky Mountains’ western expanse.

I settled in for a time of “stillness,” but after a few minutes restlessness began to creep in. Believing my time with the Lord was over, I got up to return to camp. But immediately the Lord spoke to my heart, “Not so fast, David. I’m not finished with you yet! Be still and know that I am God.” The next two hours were life changing as the Lord showed through Scripture and His Spirit the plans He had for me.

Somewhere along the way in your own walk with the Lord, working at a high operational tempo filled with busy days, deployment, and dwindling resources, you too may have missed the still, small voice of God. it happens to all of us, at one time or another, and the joy of knowing, serving and the pleasure of spending time with the Lord begins to fade in all the noise.

I’m reminded of the true-life story of Jim Morris in the movie The Rookie, a high school baseball coach who achieves his dream of making it to a major league farm club after being challenged by his players to try out. But the simple joy of just playing baseball begins to fade in the minor league world of travel, low pay, and concern for his struggling family’s welfare. On the verge of giving up, Morris’ wife dissuades him from quitting by recounting their young son’s glowing, joyous face of watching Dad play just for love of the game. His joy returned!

Some of you, such as OCF members David Ruth or Josh Gilliam, may have come face to face with the Lord Jesus Christ at RMH. In those quiet moments on the mountain, you heard and listened to the still, small voice of the Lord, “Whether you turn to the right or to the left, your ears will hear a voice behind you, saying, ‘This is the way; walk in it’” (Isaiah 30:21).

Whether you are newly commissioned, deployed, or in a high optempo job, your time is extremely limited. Maybe you have grown restless or you’ve lost the joy in your walk with the Lord. I encourage you to take the opportunity to attend one of our OCF conference centers or an OCF retreat. But even if it’s just for a few moments each day, even in the midst of a high operational tempo, seek a few minutes each day with the Lord by planning quiet time into your schedule. If you take time to be still before Him, He will speak to you.

As Christians, we have the privilege of serving the King of kings and Lord of lords. But He also invites us to come aside and just enjoy being His children. That time will stoke the brightness of His light within us and our faces will reflect that glory He gave us!