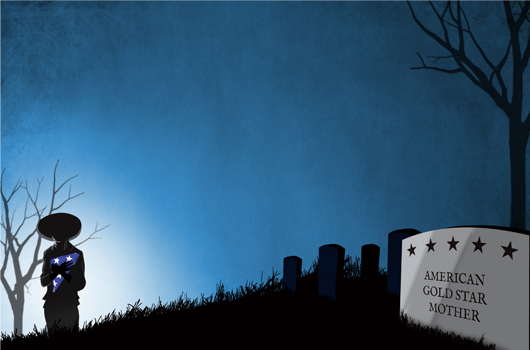 A co-worker named Diana is a Gold Star mother. This remarkable woman lost her oldest son to combat action in Iraq, leaving behind a grieving wife, their baby, and other heartbroken relatives and friends. Despite her faith, and the support of family and community friends, Diana’s wounds—pain, anger, denial, and fear for her son’s young family—are profound, constant companions she will likely carry with her until her dying day.

Death—and the separation that ensues because of it—is the curse of Adam’s sin. For Diana and her family—and countless families throughout the ages who have lost loved ones, particularly in combat situations—you can’t help but wonder, can any good come from such an unspeakable tragedy?

However, it is in the strange economy of God where He does much of His greatest work through our suffering, such as the sorrow inflicted upon us by others. The apostle Paul recounted a season of overwhelming despair in his life as, “Great pressure, far beyond our ability to endure, so that we despaired of life itself” (2 Corinthians 1:8). But in the Lord’s hands, the pain served to teach Paul that it “happened that we might not rely on ourselves but on God, who raises the dead.” And out of Paul’s period of despair came this rich fodder of biblical truth, “to live is Christ and to die is gain” (Philippians 1:21).

Sometimes suffering occurs from our own sin. King David’s iniquities of adultery and murder reaped generations of violence and betrayal in his family (2 Samuel 12:10). But after David came face-to-face with his scarred, miserable nature and repented, he penned marvelous words of God’s mercy that have guided sinners for centuries, “Have mercy on me, O God, according to your unfailing love; according to your great compassion blot out my transgressions” (Psalm 51:1).

And sometimes suffering is simply the effect of living in a fallen world where evil can strike anyone. Yet none of the aspects of suffering limit God’s capacity to use pain in a redeeming fashion. Isaiah’s prophesy about the greatest Suffering Servant declares, “By His wounds we are healed” (Isaiah 53:5). Jesus’ wounds and suffering are the venue through which we have been redeemed. Believers can rejoice because through our own lives, God uses the mystery of pain and suffering through which His eternal work shines brightly.

After David came face-to-face with his scarred, miserable nature and repented, he penned marvelous words of God’s mercy that have guided sinners for centuries, “Have mercy on me, O God, according to your unfailing love; according to your great compassion blot out my transgressions” (Psalm 51:1).

The transformation in Diana over the years as she has dealt with her loss and pain is remarkable. Already a sensitive and compassionate woman, those qualities only deepened as she began reaching out to comfort countless others. Through her questions and grief she made room for action by organizing and leading the Kansas City area chapter of the American Gold Star Mothers, remembrance walks, and a local veterans’ memorial to honor the sacrifices of soldiers and their families.

When others in the community lost loved ones in their service to our nation, Diana was the first and arguably the most effective person rushing to their side with support. She has become a cherished friend and the community’s most productive healer to those who are alone, hurting, or suffering emotional wounds. We see in Diana what Henri Nouwen calls a “wounded healer.” By embracing her wounds through the loving embrace of the great Suffering Servant, Diana has become His partner in the lives of others. Still carrying the scars of her wounds, Diana is a visible instrument of God’s healing for others.

Tom is a graduate of the United States Military Academy at West Point, serving twenty-five years in the Army before retiring in 1995 as a lieutenant colonel. After the death of OCF stalwart Dr. George Kuykendall, a close friend and mentor, Tom and his wife, Jean, responded to God’s call to “till the vineyard” at Fort Leavenworth, Kansas, as OCF field staff reps. Passionately encouraging and equipping lay military families for godly service throughout the military society, Tom and Jean have three children and eleven grandchildren.