With each passing mile behind the Waring family, a pathway toward future ministry was being paved by connecting with and hearing the hearts of airmen and chaplains.

I came across the idea of traveling to Air Force installations when considering how Tami and I would build the bridges for ministry at Maxwell-Gunter AFB, and how we would know what was going on at Air Force installations in the continental U.S. Since our family had spent fourteen of our last eighteen active duty years in overseas assignments, I was concerned that we lacked an awareness of what airmen were dealing with across the force.

We also wanted to spend time with each OCF field staff rep couple at their locations so that we could learn about the ministry they do, lessons learned, and forge good relationships with them. It’s one thing to hear about ministry occurring at the academies or key locations, but far more meaningful to have actually walked the ground they labor on.

Our trip helped us develop a mental picture of nearly every Air Force base, each chapel and facility. We gained a glimpse of some of the mission mindsets at those bases. Now when we greet and welcome new students at our country’s intellectual center for airpower education, I have a platform to say I’ve visited the base they are coming from or going to. This provides social conversation for becoming better acquainted. With OCF members around the country knowing that we’re here at Maxwell, some of the folks who arrive TDY or PCS are referrals from those we’ve met while on the road.

We consider fellowship gatherings as fairly synonymous with Bible studies since nearly everything we do involves a Bible study. We host and lead six of them weekly, which are attended by all ranks, ages, and DoD services. We also host monthly socials at our house that are opportunities to get to know students at a deeper, more personal level than Bible studies allow, especially with Officers Training School and Squadron Officers School graduates.

We focus on the Scriptures for Bible study, but use food and drink, and stories from our careers to empower and amplify the message of the gospel. Our hope is that men and women might gather to be taught, encouraged, exhorted, and equipped for further work during these years of military service and throughout their lives. We want them to use the military-specific language and cultural knowledge they have to do outreach to folks at bases, posts, ROTC units, and local communities.

Editor’s note: It was the road trip of a lifetime, the 2013 “HousHold Adventure” of Col Houstoun and Tami Waring, USAF (Ret.), and their family. They started in Alaska and ended in Alabama—with forty-two other states in between. Nearly fifty Air Force installations later, the Toyota Tundra carrying Hous and Tami, their daughters, Muriel, Virginia, Isobel, and son, Richard, plus their dog, Jet, over sixteen-thousand miles pulled in to Maxwell-Gunter AFB in Montgomery, Alabama. OCF’s new field staff family was finally home. The trip was a unique journey full of fellowship opportunities with friends old and new. With each passing mile behind them, a pathway toward future ministry was being paved by connecting with and hearing the hearts of airmen and chaplains. 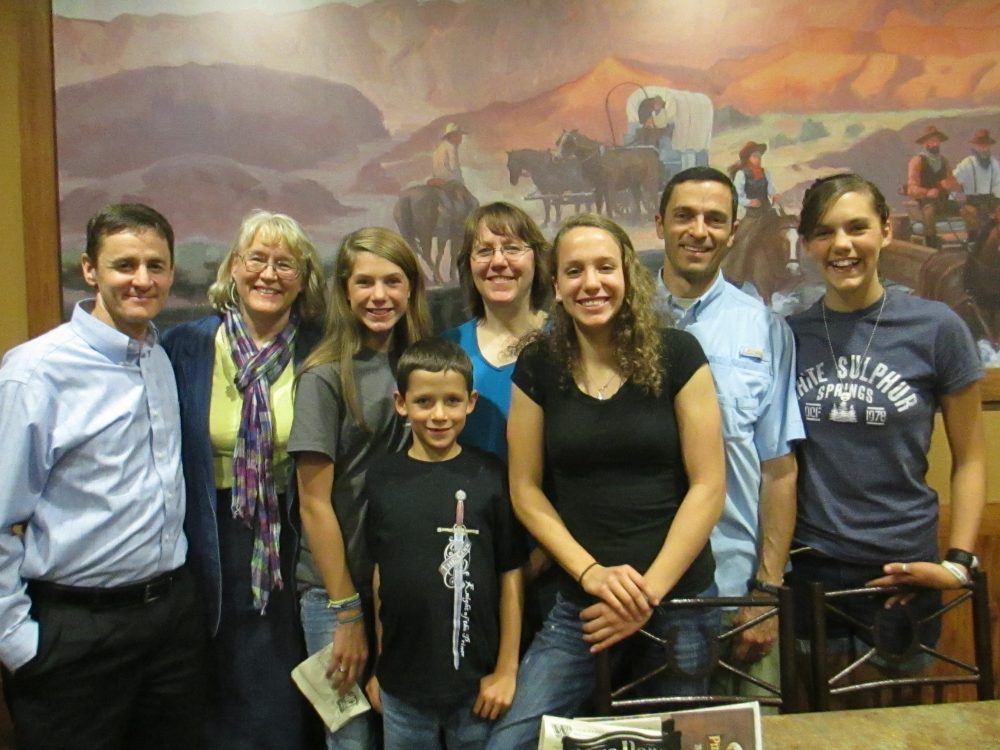 Our trip helped me to know and become known by the chaplain community. It established a type of trust with them, to welcome me as a friend rather than a stranger. Every chaplain has an opinion about the reputation of parachurch organizations and non-profits, usually based on a good or bad experience. Since OCF is only as good as the local leader or contact, my hope was to establish a positive starting point for all the chaplain teams regarding OCF, and why we serve from Montgomery.

We heard themes from the chaplains regarding the ministry they do, the type of volunteer partnership needed, and the requirements levied by their career field. We have a much greater empathy for the requirements they have to fulfill—accomplishing unit engagement, faithfulness to their endorsing bodies, etc. By making personal contact with chaplains and staffs, Tami and I think we’ve helped make OCF a better known body of believers, and have provided a positive experience for religious support teams to know that we love them and want to support the chaplaincy.

It was a great joy to see how many doctrinally sound chaplains are serving around the Air Force. Non-military friends often ask us about the state of the chaplaincy. And while some news channels and conservative outlets report problems, we can encourage anyone who wonders by reminding them to stay the course in loving the men and women who are willing to serve in order that military members and their families might exercise their freedom of religion and free speech.

Our trip also developed within me a willingness to travel, stay connected, and better reach out to local OCF leaders and the offices of chaplains. So much of my administrative coordination of itineraries, appointments, etc., takes place while on the road, meaning one of our kids sitting next to me is often taking notes, texting, or looking up phone numbers for me. They are a huge part of the team.

Our intent is continuing in the footsteps of those who have ministered at Maxwell before us, to help others become effective servant leaders wherever they go, so they use their limited military career years well. But we are especially striving for a future day when a majority of Air Force leaders know about OCF and the work we do as a ministry. We hope to be gardeners stirring up men and women to know and proclaim the gospel of our Lord Jesus Christ and glorify God in their professional excellence and integrated lives.

How did you come up with the idea of a road trip across the U.S. to visit Air Force installations?

Since we would be traveling from Alaska to Alabama through Canada, and I had several months of leave to use, I sat down with a map to see if it was possible to visit all the Air Force bases in the lower forty-eight states.

What were some of the objectives of your visits?

To become more current and relevant, we wanted to talk with airmen and chaplains out in the field and with those who are alone. How can OCF members support the chaplaincy, and work through it better, both at home and deployed?

What were some of the outcomes from your trip?

I found God uses even quick visits to allow us to connect deeply and have a starting point for further fellowship. Face-to-face travel took me from being a stranger on email or in a text, to being an acquaintance or friend of someone I met at a previous base. My hesitation to enter the lives of men and women on a short-term basis was removed.

Most surprising things you learned on the trip?

Some snapshots of your life on the road?

Our dog was at the feet of our three girls in the back seat; Tami, Richard and I in front. Tami taught Richard nearly every day with a tile-based system to develop his ability to read, helping him cope with dyslexia. The kids used computers and books to keep up with school. We planned many of our stops around class requirements so that we could have wireless access while one of the girls was online in a classroom.

Having a plan to stop for the night, pop up the trailer, cook dinner, allow the kids to do homework or write letters, update our travel blog, and try to communicate a day or two ahead with those places we were going to visit next. Sometimes we were hosted by OCF families, but as introverts, there were times we really needed to be apart in our pop-up. And it’s fair to say I completely underestimated what it takes to travel, visit, attend meetings, and head off to the next base to repeat the process.

Most meaningful visit along the way?

So many fond fellowship memories happened. One experience made a big impact on how I teach OCF leaders to support their military leadership and the chaplaincy, and to be found as godly partners operating under authority. The size and wonderful love we found in one particular group sticks out because it had a significant communication disconnect with the wing chaplain. Despite the immediate suspicion I sensed when asking about their familiarity with the base chaplains, the next day we had an appointment with the wing chaplain—also an OCF member—who had tried on several occasions to reach out to these local OCF leaders. But they didn’t understand his responsibilities—nor ever communicated what was happening in their local body.

About Hous and Tami: Serving as OCF field staff reps at Maxwell-Gunter AFB, Hous and Tami met and married as a result of God’s work and OCF’s presence at the U.S. Air Force Academy. Hous was a F-15E Strike Eagle pilot; Tami’s Space System Analyst specialty changed to mother and teacher, raising their nine children (three still at home). They underscore a key OCF Spiritual Pillar of supporting the chaplaincy via attendance at services and volunteerism.