Louisa Buxton: ‘She was a jewel’

Louisa Buxton, widow of the then-Officers’ Christian Union’s first general secretary (executive director), Cleo “Buck” Buxton, who as her family said, “helped shepherd Buck’s dreams into reality,” joined her husband in heaven in the arms of the Lord Jesus Christ on 14 June. Louisa was 96 years old.

“I cannot think of any wife who was more supportive of what God had asked her husband to do—sometimes in very difficult circumstances,” said LTC Sandy Sanderlin, USA (Ret.), a former Director of Administration, Finance and Development for Officers’ Christian Fellowship.

“Her servant’s heart attitude is what I admired most about her. She gave up her career as a nurse for the sake of the ministries of OCF and later ACCTS (Association for Christian Conferences, Teaching and Service), to be supportive of Buck.”

Born in Philadelphia, Pennsylvania, in 1923, Louisa became a registered nurse at the University of Pennsylvania and worked in its hospital during WWII. Louisa married Cleo in 1946, and they moved to Haslett, Michigan, where they raised four children. 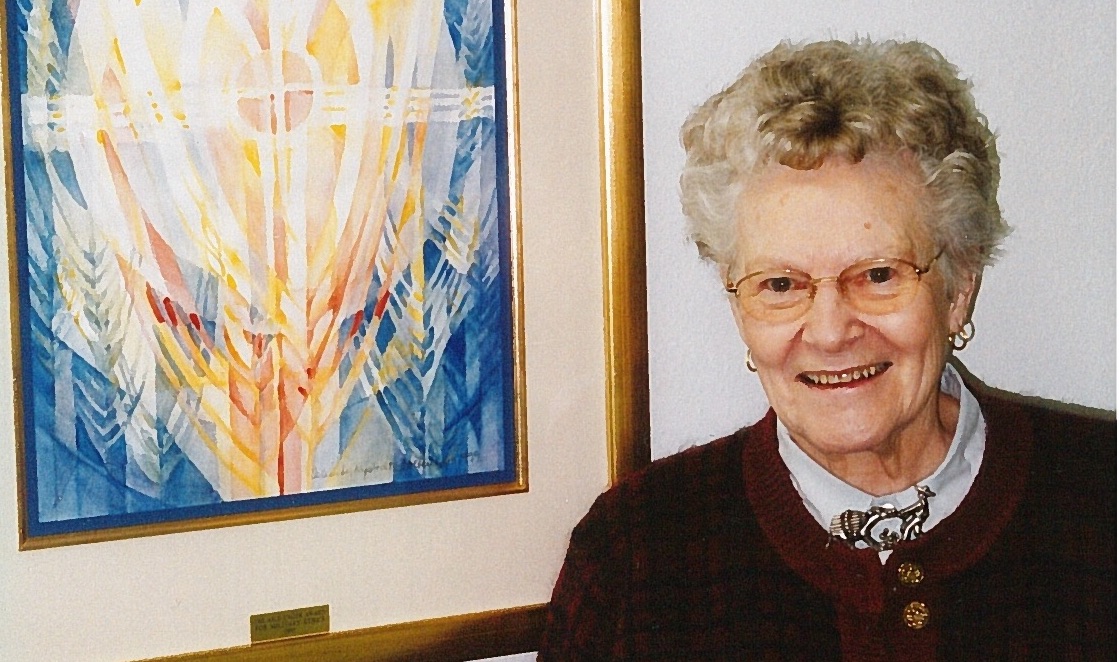 ‘Louisa was an amazing individual who could do whatever she turned her hand to do. She spoke French, played the violin, had a wonderful reading voice, and could read a book faster than anyone else in the family. She instilled a love for Jesus, poetry, and reading in her children.’

Buck became the first full-time staff member of the OCU as general secretary, and their Michigan home served as the OCU’s first business office, with the Buxtons and other family members and friends forming the first office staff.

“Louisa did all the mailings and maintained the ‘database’ which consisted of metal plates, one for everyone on the mailing list,” said CAPT Terry Grant, USCG (Ret.), who served OCF as a Director of Finance. “She maintained this system, prepared labels for member mailings, then helped label and stuff the envelopes.”

To keep members informed and in touch with one another, the Buxtons formed “The Bulletin” newsletter, which was the forerunner to COMMAND magazine. “Louisa overcame many obstacles of a non-centralized ministry to provide news of OCU members serving God in the U.S. military worldwide,” said Michael Edwards, former COMMAND editor and OCF Director of Communications.

“She was a thoughtful editor who worked diligently to tell the story of God at work through OCU and OCF. The historical accuracy, as well as interesting photos and anecdotes, brought members together through the pages of the bulletin and magazine.”

“Louisa was the one who put action into the ideas for OCF,” said Lt Col Dell McDonald, USAF (Ret.), who serves on the ACCTS staff for international discipleship. He said that in addition to Louisa serving as “editor, frequent writer, and publisher of the OCU newsletter and early COMMAND magazine,” she also wrote many receipt letters to the donors.

“In most cases she added a personal note of some sort about the family and developed a personal relationship which was long remembered,” said Lt Col McDonald.

Louisa supported Cleo’s dream of a “building up the believer, evangelizing the nonbeliever” via conference center ministry resulted in what is today’s Spring Canyon Conference and Retreat Center in Buena Vista, Colorado. The first summer program there took place in 1962. As her family noted, “Louisa’s delicious meals kept thousands of people fed at Spring Canyon, as well as handling “multiple medical needs out of her small tan suitcase.”

In addition to her talents as a chef and camp nurse, CAPT Grant observed that Louisa was also an “all-around helper and encourager. She was always good-natured, and I can’t picture her except with a smile on her face. She was fully committed to Buck and to the OCU/OCF ministry.”

“Buck and Louisa were the heart and soul of the ministry,” said Grant. “She was a jewel.”

As Louisa’s family wrote in a release about her passing, “Louisa was an amazing individual who could do whatever she turned her hand to do. She spoke French, played the violin, had a wonderful reading voice, and could read a book faster than anyone else in the family. She instilled a love for Jesus, poetry, and reading in her children. She was described by friends as a gracious and caring person.”

“Louisa was such a godly woman,” said LTC Sanderlin, who also talked about how caring and supportive she was of his family, especially his sons and their future lives. “I never saw her get flustered, irritated, or angry. I can’t think of any individual I admired more than Louisa Buxton.”

“She was wise and she was godly. She was a very positive witness for Christ to all who came into her presence. My wife and I loved being around her,” said CAPT Grant.

“As Christian editors, we often say that we will never know ‘the end of the story’ after someone picks up a publication,” said Edwards. “That can especially be said of Louisa Buxton. Through her behind-the-scenes editorial work, and her tireless pursuit of news, photos, and articles written by members, she literally touched the lives of thousands of Christians throughout the U.S. military society.”

“Even now she is meeting people in heaven who may be saying, ‘You know, I read an article in COMMAND magazine that changed the way I led my people. It transformed my leadership and influence. Thank you!’”