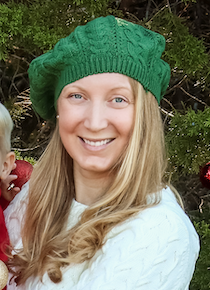 Lt Col Kate Toms is a C-17 Instructor Pilot currently assigned to doctoral study in philosophy. She and her husband enjoy hospitality, outdoor adventure, and delighting in the cute antics of their young children.

Simply acting or reacting is not necessarily an effective leadership quality.

Today’s Scripture reading comes from Matthew 26:52-54, quoting from the NASB:

“Then Jesus said to him, ‘Put your sword back into its place; for all those who take up the sword shall perish by the sword. Or do you think that I cannot appeal to My Father, and He will at once put at My disposal more than twelve legions of angels? How then will the Scriptures be fulfilled, which say that it must happen this way?’”

Jesus wielded His influence—not his power—to accomplish the prophecies concerning Him. Man’s natural inclination is to think: He who carries the biggest stick wins. That wasn’t the case when Judas, who betrayed Jesus, arrived with the arresting party who would ultimately be responsible for Jesus’ crucifixion. Instead of condoning Peter’s protective gesture of striking the high priest’s servant, Jesus healed the injury Peter inflicted and told him to put away his weapon.

Jesus could have commanded a greater force than Peter’s dagger. He could have responded to the arresting entourage with a show of His mighty power or through a simple appeal to his Father who would have put thousands of angels at the ready for Jesus’ use as He pleased. Instead He identified Himself as the one they sought. A good leader becomes self-evident by his actions. That is, one leads best when one’s actions reflect decisions arrived at through calm, calculated, inspired thought rather than reckless displays of power. Jesus did that. He told Peter to put away his sword. His command to Peter reveals that leaders who use overwhelming displays of power are not always effective at accomplishing the mission.

Jesus’ mission was to ensure the prophecies concerning Him would be fulfilled. His leadership style was that of influence and not the use of “shock and awe.” Faith and leadership are therefore more appropriately modeled through keeping sight of how to achieve God’s purposes in and out of the workplace through godly influence, using softer tones, quieter approaches and direct resolve to see the mission through. Simply acting or reacting is not necessarily an effective leadership quality. Leading entails helping people see the bigger picture when “it must happen this way.”

Consider the following questions as a possible test of how effectively you are integrating your faith and leadership through influence in your workplace or place of service.