By God’s grace and the extraordinary generosity of donors, the OCF Council approved upcoming renovations at White Sulphur Springs to the Harrison House facility, the construction of a centralized maintenance building, and the addition of a bathhouse at Camp Caleb Basecamp.

All three projects, projected to be completed before summer 2023 programs begin, will meet a steadily increasing demand for a home base where generations of military-affiliated individuals can gather and be equipped for their walk with Christ.

Donors have already given approximately $5 million toward these expansion efforts, leaving a gap of $850,000 to be raised across the WSS/OCF community before renovations and construction are completed. To learn more about and support this effort to sustain another 40 years of ministry, visit whitesulphursprings.org/renovations.

“This is a wonderful first step toward the main effort of our upcoming 5-year strategic framework of increasing our shepherding of our local leaders stationed around the world,” said Scott Fisher, OCF Executive Director.

Steve commissioned as Infantry from USMA in 1974, and served 30 years active duty before moving into other jobs such as at the U.S. Air Force Academy in Plans and Programs and the Center for Character and Leadership Development.

The Shambachs, who have three children and one grandchild, also serve on the Spring Canyon Advisory Council. 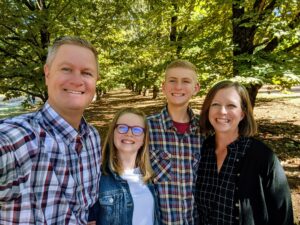 The Punts “both have a huge heart for the Lord and a strong desire to have an impact in His kingdom work,” said Scott. “David has a wealth of experience both in ministry and the corporate world.”

An ordained pastor who previously served both as an executive pastor and a youth pastor, he started as a CPA and auditor for PricewaterhouseCoopers before moving into ministry, which included roles as the CFO of a Christian university, a controller with World Vision, the director of finance at Saddleback Church in California, and serving as a certified treasury professional with Evangelical Christian Credit Union.

The Punts have two children, Jonathan and Emma.

David fills the role vacated by Dave Osborn, who resigned from his Director of Finance role “due to personal circumstances,” said Scott. “It is with joy we reflect upon how the Lord used Dave O. to grow and align OCF during his tenure.” 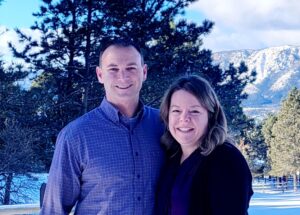 Longtime ministry team members and leaders for USAFA OCF, Lt Col Paul and Janee Homan, USAF, will start on 5 August as the newest USAFA OCF staff couple. They step into the role Steve and Rita Wade retired from in 2020.

During the gap between the Wades’ exit and the Homans’ onboarding, Col PK and Lindsey Carlton, USAF (Ret.), and Cindy and Lt Col Paul VanderWeide, ANG (Ret.), have served as OCF staff leaders.

The Homans, both USAFA graduates, are serving as one of the USAFA OCF ministry team couples. Paul served as the OCF cadet in charge while at at USAFA, where he now serves as a professor. They also both served on the ministry team during an earlier assignment. Janee separated from the Air Force after her initial commitment. The couple have four children.

“This is a wonderful answer to more than two years of prayer for many of us, and we are excited to see how the Lord will lead,” said Scott Fisher, OCF Executive Director. “Both Paul and Janee have been extremely active leading in OCF from cadets through their current assignment.”

He added, “It is truly incredible to see the fruit of leaders such as PK and Lindsey Carlton, and Cindy and Paul VanderWeide, who so faithfully served at this strategic location.”

OCF members are invited to participate in a ministry opportunity as Bible study leaders at this summer’s Cadet Summer Training (CST), 26 May-17 August, at Fort Knox, Ky. As many as 10,000 Army ROTC cadets and 5,000 cadre attend CST, the Army’s largest annual training event conducted in a single location.

Along with the Navigators, Valor, chaplains, who play a large role in coordinating this CST ministry, and other ministry partners, OCF conducts Sunday and Wednesday evening Bible studies.

While the greatest need for additional Bible study leaders is during the 26 June-20 July summer surge, OCFers are encouraged to join in whenever available. Last summer more than 3,200 cadets and cadre attended the Bible studies, with hundreds requesting follow-on military training linkups or information for joining Bible studies on their campus. Thirty prayed to receive Christ.

This past October, 15 regular and special Council members convened at Spring Canyon Conference Center for the regularly scheduled Fall Council Meeting. Though met with unexpected but beautiful snow, all were excited to be meeting at Spring Canyon for the first time since 2019. As with every OCF Council meeting, Rob Crespo kicked off the first morning with a Pray, Discover, Obey session—a time devoted to seeking the Lord’s guidance.

Ministry directors were afforded an opportunity to provide the Council an update on their specific ministry and share praises and prayer requests. These interactions were enjoyed by all, and it was invaluable for the Council to hear firsthand accounts of God’s goodness and blessings through OCF’s laborers.

In addition to various administrative tasks, the Council was elated to have approved the latest OCF Bylaws, and a revision of the Council Governance Manual was briefed as in-progress. OCF Executive Director Scott Fisher received Council approval of his FY23 Priorities, which he briefed and identified alignment with the Strategic Framework 2.0.

As with many Council meetings, the opportunity to honor individuals who have selflessly served the Lord is a high point. At this meeting, the Council took time to thank and honor Director of Finance Dave Osborn, who shepherded OCF’s finances with both excellence and integrity. Ric Schumacher and Scott Fisher later took time to honor Greg and Lucy Lane, who served for nearly 20 years with tremendous impact doing OCF ministry, most recently as OCF’s ROTC Ministry staff couple.

Thank you to all who prayed over the Fall OCF Council Meeting!