Introducing the newest tool for military ministry: the OCF Handbook

The transience of the military lifestyle and the geographic vastness of the duty stations to which service members and their families may be called can often leave members feeling disconnected from the broader OCF community scattered across the globe.

Enter the OCF Handbook, written over the course of the past year and a half and released earlier this summer. This 37-chapter resource casts vision for military ministry, explains OCF, discusses the military Christian life, encourages personal spiritual growth, and gives ideas for executing member-led ministry.

Having received increasing requests for OCF information from members and leaders, Col Houstoun “Hous” Waring, USAF (Ret.), saw the opportunity to craft a new resource that would unite a geographically dispersed body.

“The Handbook reminds me I am connected to the whole body,” said Hous, director of field engagement and primary author of the Handbook. “It’s not just a little world that I’m living in.”

After first receiving a copy of the Handbook in early August, 1st Lt Anna Demoret, USAF, quickly incorporated its content into her own ministry as a local leader of a women’s Bible study at Wright-Patterson AFB.

“This is a really valuable resource to connect the scattered Bible studies back to ‘big OCF,’” Anna said. “The timing was a big blessing, as we had just gotten a new group of girls in, and we were prepping to talk about our statement of beliefs.”

Even the process of assembling the Handbook reflected the unity it aims to develop now in its published state. Rather than write the Handbook alone, Hous collaborated with a team of nearly 30 OCF members who represent the same range of services, ages, and denominational backgrounds represented across the rest of the OCF membership.

This year’s Handbook resembles its 1972 and 1991 predecessors, but Hous explained that those earlier handbooks were written during a different time for a different military. To serve a united yet diverse group of Christians in the military effectively, the 2022 edition needed to reflect the past 31 years of an evolving military culture and a growing OCF ministry.

One such example, Hous shared, was the many different home environments found in the military community today. “You have single parents in the military, you have dual military parents, and we had to update a lot of our language and expectations.”

Download a copy of the Handbook or read each chapter online in the OCF Handbook section of the website. 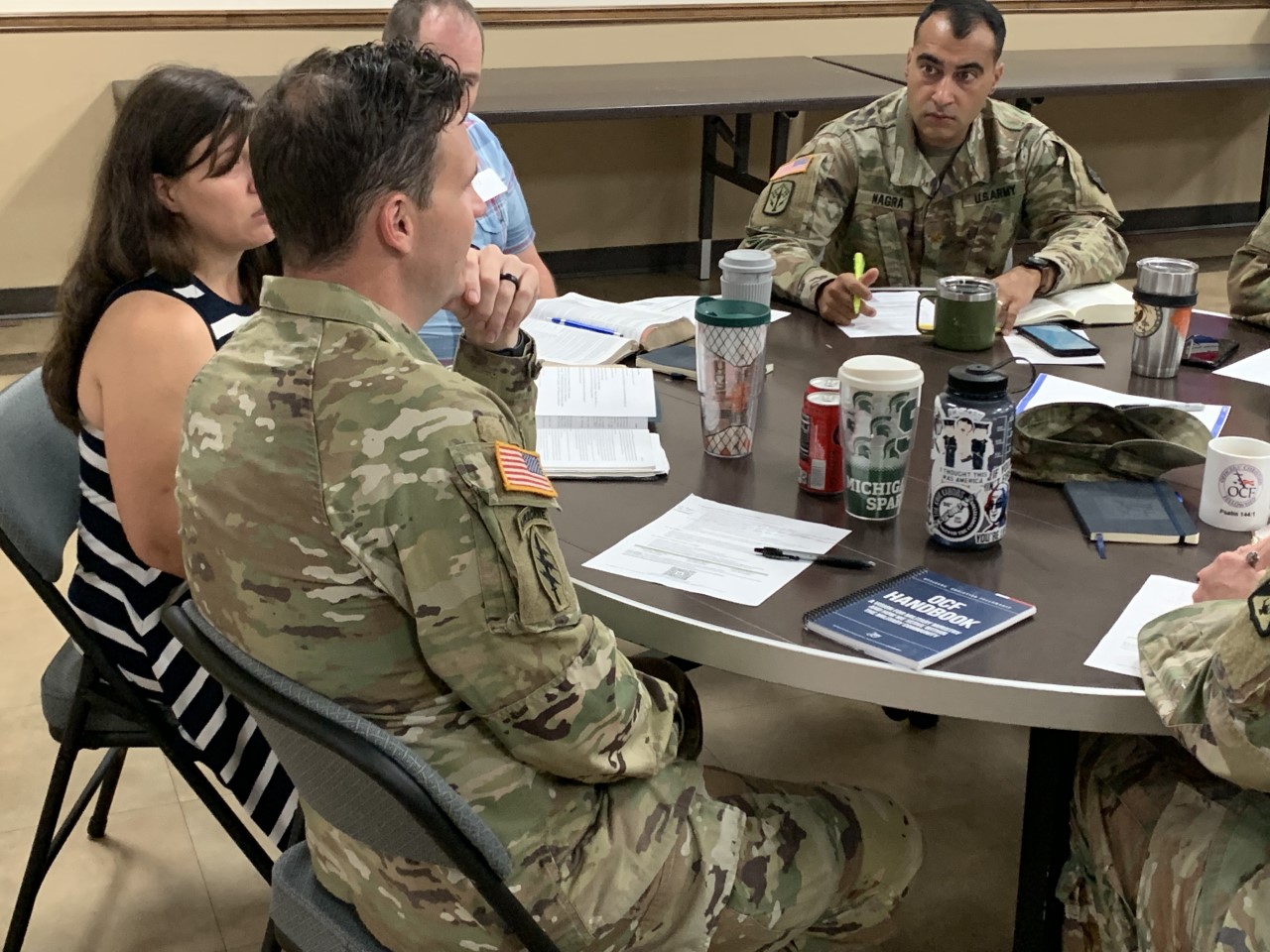 An OCF group at Leavenworth discusses the OCF Handbook at a recent gathering.

One facet that has remained throughout OCF’s nearly 80 years is its ministry focus to equip those in uniform for Christlike service, and the Handbook continues to advance that effort.

“This book was perfect for a new officer wanting to understand what it meant to live as a Christian leader in the military,” said LTJG Jon Cardinal, USCG, recalling his first impressions when he received the Handbook while serving as a co-mentor during a week of Spring Canyon’s Rocky Mountain High program.

Hous shared the Handbook with Jon and RMH attendees, who discussed the resource daily throughout their week of leadership development together. In the subsequent weeks, Jon has incorporated the book’s content in his own personal ministry while stationed in Kodiak, Alaska.

“It has improved my ability to love and serve others in my own ‘mission field,’” Jon said. “And it has encouraged me to glorify God in my work and to understand my own professional calling.”

Jon noted his appreciation for the ease with which readers can dive into whatever topic applies to their personal ministry at any given time. “I am generally a little hesitant to add another book to my backlog of reading, but this was a perfect fit as it is a quick reference guide with applicable and directed wisdom,” Jon said.

As a resource written by service members for service members, the Handbook covers topics unique to the Christian in uniform. Jon said he likes how specific topics such as worldview, authority, promotions, opposition, local church involvement, and the military chaplaincy are discussed in ways that encourage him and remind him of his purpose to glorify God.

“I would encourage every young officer and leader to engage this resource,” Jon said. “While it in no way replaces the need for a mentor, it provides sound, proven, biblical wisdom applied to various common struggles, questions, and skills that the military community would benefit from.”

Speaking from her own experiences as a local leader who started a study, Anna said the Handbook would prove extremely helpful for someone feeling called to start a local fellowship where an OCF group does not yet exist.

“It walks you through a lot of things about starting, sustaining, hosting, facilitating, and handing off Bible studies (chapters 12-15), as well as general local biblical fellowship resources,” Anna said.

“It is also a nice accountability check for existing OCF leaders,” Anna said. “There are practical tips about running a Bible study that are easy to overlook, and I’ve been able to incorporate new additions after having the Handbook for only a couple of weeks.”

Having served as a local leader in areas such as Washington, D.C., and South Korea prior to his current role as OCF’s CEO & executive director, Col Scott Fisher, USAF (Ret.), said the Handbook’s quick references can ease the burden for those who lead a ministry while also serving on active duty.

“The intent is not to be prescriptive but to be informative and supporting,” Scott said. “We’re not trying to prescribe how someone has to do something at the local level, but the Handbook is meant to show them how they could do it if they are looking for guidance.”

“The revised Handbook is a major step toward ensuring local leaders and members understand ‘Why OCF?’ and ‘How do I lead a local Bible study?’” said COL Paul “Ric” Schumacher, USA (Ret.), president of the OCF Council. “That has been the heart of OCF for our entire existence.”

Throughout the life of the ministry, OCF’s members and leaders have amassed an extensive library of resources. Hous saw the Handbook as a chance to consolidate that vast collection of OCF content in a user-friendly, accessible way, noting that the Handbook in its print and online forms now provides a quick connection to OCF’s many ministry tools.

“We finally have a concise resource that not only describes who we are, but is also an extremely practical resource for how to do ministry,” said LTC Jim Harbridge, USA (Ret.). As OCF Field Staff Representative at Fort Leavenworth, Harbridge has distributed the Handbook to soldiers as they’ve gotten involved with local ministry.

An additional facet of this strategic goal is to partner with local churches and other like-minded ministries, and Hous said he’s seen the Handbook meet that goal as he’s distributed copies to pastors and elders whose flocks include men and women in uniform.

“I’ve used this resource for those trying to understand why a parachurch organization like OCF is coming alongside the bigger church,” Hous said, adding that sister ministries will also benefit from a resource that comprehensively explains OCF. “It’ll help others really understand how to partner with OCF so that we do things together.”

Regarding the future of the Handbook, Hous and Scott both welcome feedback for subsequent editions of this ministry tool. “We don’t want people to feel like they have an old copy that’s no longer relevant,” Hous said. “But we’re looking to keep it relevant to the time and place where people are serving.”

Scott described the latest edition of the Handbook as not only “the beginning” of a new dialogue with leaders and members, but also as a means to enable the ministry’s short-term strategic goals. “Our only real desire with this Handbook is that it will be a part of equipping, encouraging, and emboldening our local leaders and our members at large,” Scott said. “We want to hear how we can continue to do this better.”