By Josh Jackson, Director of Communications

During a recent podcast interview with LT Jonathan Gentry, CHC, USN, we were talking about how people can support their chaplains. Once we had stopped recording the interview, our conversation about chaplain support continued and included a brief chat about compassion fatigue.

He shared this insight with me: “Anybody who provides any type of care to others is usually the worst able at taking care of themselves. Sometimes we need people to check in on us. One of our sailors asked about that one time. She said, ‘Well, who’s looking in on you, chap?’”

It was this conversation with Jonathan that prompted us to focus on crafting a variety of chaplain-related content in this issue of Command, both for chaplains and for those serving alongside chaplains.

The following article will briefly examine compassion fatigue, offer ways you can pray for chaplains, share stories of how the role of chaplain is a lonely one, and inform you of OCF’s perspective on supporting chaplains as outlined in the OCF Handbook.

CH(LTC) Todd Cheney, USA, recalls a particularly difficult five-day span while serving as the coverage chaplain for the combat support on a deployment to Iraq in 2008.

“We had a tank rollover that injured four Marines, an infantryman who was killed by a sniper (our med team worked on him for 45 minutes to revive him), and a medic who was going through a very difficult divorce who shot himself through his left shoulder to expedite a trip home because his soon-to-be ex-wife would not allow him to talk to their daughter on her fourth birthday,” said Cheney.

The series of events left an indelible mark, draining him “emotionally, physically, and spiritually after a week of non-stop pastoral care.”

The exhaustion Cheney described is known as “compassion fatigue,” which is the result of frequent and cumulative exposure to trauma and stress.

The National Library of Medicine defines compassion fatigue as stress resulting from exposure to a traumatized individual. It’s the convergence of secondary traumatic stress and cumulative burnout, a state of physical and mental exhaustion caused by a depleted ability to cope with one’s everyday environment.
Because compassion fatigue isn’t always evident and often manifests in different ways and to varying degrees, studies suggest the rate of compassion fatigue could range from 40%-85%.

CH(COL) Bob Phillips, USA, has seen and experienced firsthand how compassion fatigue impacts chaplains differently, saying it can span the spectrum from feeling mildly discouraged and slightly disoriented for a few days, to a total breakdown, depression, questioning of one’s calling to ministry, negatively impacting family relationships, and loss of pastoral identity.

“I have seen chaplains who returned from deployment whose lives became totally unraveled,” said Phillips, who also serves on the OCF Council. “Their experience with trauma, death, and combat ministry left them emotionally wounded and spiritually exhausted. Some doubted their faith, some left the ministry. Some recovered, some didn’t.”

Phillips recalled one chaplain friend whom he described as being a very pastoral and caring man before a difficult deployment in which his friend was “surrounded by death” left him overwhelmed and suffering from compassion fatigue.

“Our paths crossed while we were down range and we met for dinner one night. I was completely taken aback at how calloused and hard he had become,” said Phillips. “He was almost uncaring about the deaths of his soldiers. It’s ‘business as usual around here’ was his comment to me. He said, ‘That’s what we do here, we fight and our soldiers die.’

“I knew he was hurting but I also knew that the mess hall was not the place to start a discussion about what was going on,” Phillips said. “I also knew that his callousness was the way he was coping and that was what kept him doing his job.” 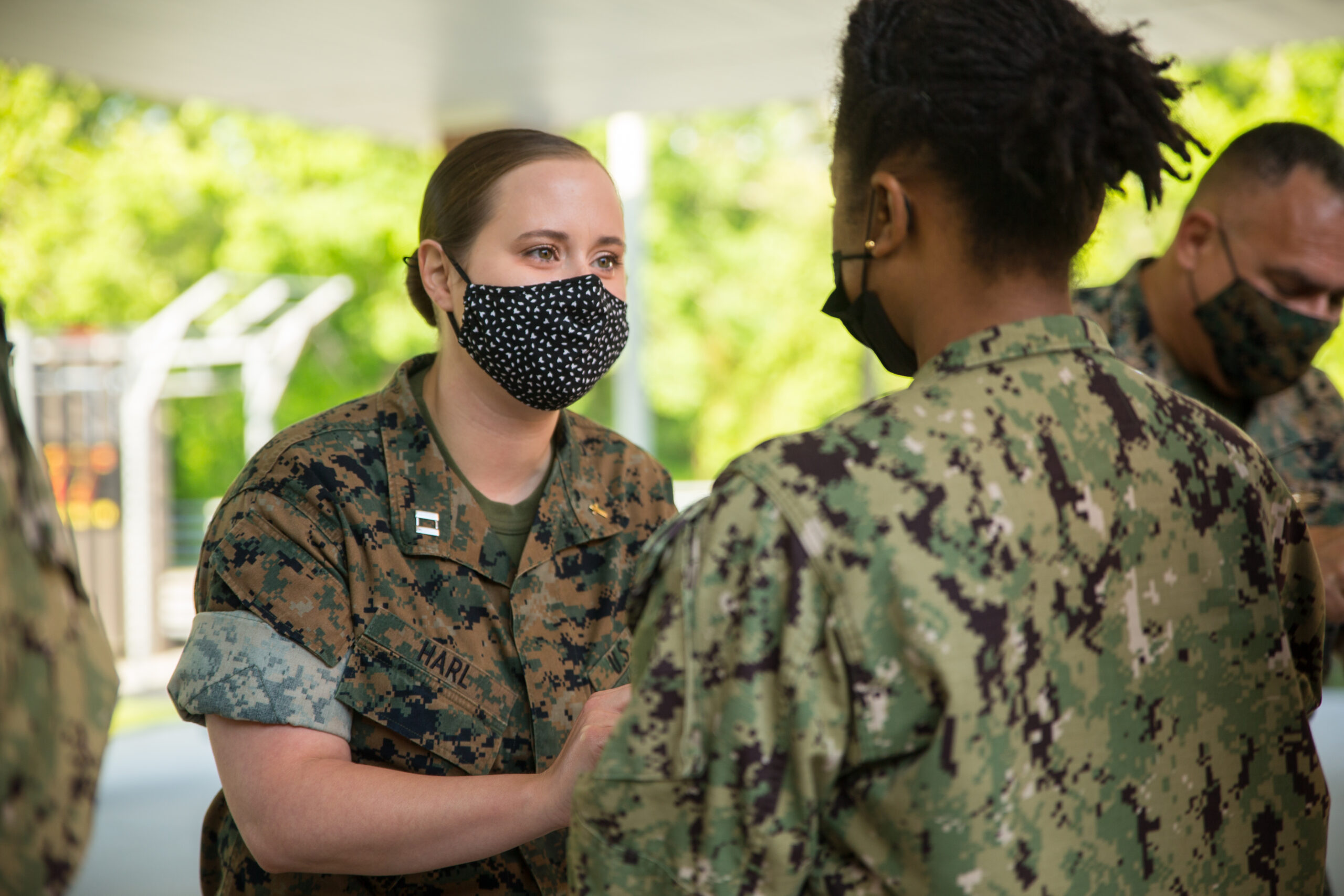 Phillips went on to say his own experiences with compassion fatigue were mild, leaving him a bit disoriented and a little depressed for a few days.

One experience occurred while he was enrolled in a one-year hospital chaplain residency at Duke Medical Center in North Carolina. Phillips was the on-call duty chaplain one evening.

“During that night, in a twelve-hour period, I was called to six death visits. Three of them were very traumatic and I can still remember them vividly,” he said. “For several days afterward, I was withdrawn, discouraged, feeling numb, lacked energy, and questioning my ability to be a chaplain. Fortunately, these feelings lasted only a few days and I was able to regroup, focus, and return to my regular routine.”

At other times in his career, Phillips said it was difficult not to take the problems of others personally.

“One night I was unable to get to sleep because I couldn’t stop thinking about a couple I was counseling through some marital difficulties,” he said. “I came to realize that I was owning their troubles, dysfunctions, wounds, and pain. I was allowing the deep emotion of it all to impact me personally. I also realized that for some of these soldiers and couples, I was working harder to resolve their distress than they were.”

After retiring from 26 years of chaplain ministry, CH(COL) Marc Gauthier, USA (Ret.), says he had fatigue he was not even aware of. “I felt much like a turtle tipped upside down. I knew I was there but didn’t know how I got there.”

He explained that while going through a mediation, the facilitator looked at him and said, “Marc, you need to find someone to grieve with you!”

“It caught me totally off guard and I thought, ‘And who would that be?’” he recalled. “However, I prayed that God would provide someone, and He graciously provided people and opportunities to process a backlog of grief that has accumulated over the years.”

The NLM goes on to say that compassion fatigue can impact standards of patient care, relationships with colleagues, or lead to more serious mental health conditions such as PTSD, anxiety, or depression.

Gauthier recounted another instance in which his unit had experienced a number of deaths through several months and was supporting in a rear detachment capacity.

“We have our first combat deaths in [Operation Iraqi Freedom], and I was a part of the notification team, providing follow-on care for two spouses and conducting the memorial service. The day after the service one of our chaplain assistants committed suicide. We found him in his room,” he said, adding that his supervisory chaplain made several extra trips just to provide pastoral care to the unit ministry. “He set the standard for chaplains caring for other chaplains when they’ve gone through a dark time. supervisory chaplains need to care for their own.”

When Ch(Lt Col) David Merrifield, USAF, was deployed to Iraq in 2009, his wife immediately noted a change in his demeanor while connecting via Skype.

“We had some very long days with counseling out the door for several weeks in a row as well as a few tragic events,” he recalled. “My wife immediately noticed something and wondered what was wrong with me. We hadn’t had comms in a few days and she could see and hear that I was different.”

“Before this, I had never noted a lack of concern for people since becoming a chaplain in 2005.”

“I felt much like a turtle tipped upside down. I knew I was there but didn’t know how I got there.”

Because compassion fatigue affects everyone differently, it’s not always easy to pinpoint a single solution to dealing with or healing from such stress, but self-awareness and the support of a community of believers appear to be good places to start for most.

Several years ago, seven OCF military chaplains were interviewed for an article in Command magazine titled “A Questionable Life.” When asked how chaplains can deal with the gravity of the information that they heard from those they counsel, CH(LTC) Kenneth Stice, USA, said:

“Establish accountability partners to share the burden. Without breaking confidentiality or privacy, it is possible to have others agree to pray and listen to your load.

Pour out your heart and soul to God. I have found the honesty of the Psalmists to be the ticket to ‘getting real’ with God,” Stice said. “I lay it out for Him in my journal—where I can collect and express my thoughts—just myself and Him. Months later, when I flip through those pages, I can then appreciate how God was working on me and through me to do something. It also helps me share private expressions that I don’t think anyone else would understand, but He always does!”

Merrifield says some of his compassion fatigue “symptoms” were mitigated by several intentional steps, which included: “Extended prayer, fasting, time in the Word (usually the Psalms), encouragement from loved ones and mentors who discipled and counseled me. Also, more sleep, additional exercise, and sharing the 24/7 on-call hours with additional chaplain partnerships.”

Gauthier says grieving can be a tricky thing for chaplains.

“When a death or crisis comes, chaplains need to put their emotions on hold so they can provide the ministry that is required,” he said. “Usually, they intend to find a time when things slow down to grieve, but instead, it just gets stuffed.”

It’s also important for those in the military to keep their eyes on their chaplains, said Gauthier.

“When they are aware of times they are redlining in their care for their units and families, reach out, be a listening ear,” he said. “Pray with them and be a Christian brother or sister to them. Grieving is best done in loving, caring community.”

Gentry echoed that sentiment, saying, “Get past the basic pleasantries and really check in on them. Sometimes we need that. We have a lot on our hearts that we can’t share with anybody. Just ask, ‘How are you doing? How can I pray for you?’”

And to everyone else? “Pray for us. Pray for wisdom for all chaplains. Pray that we minister well,” he said. “I have no clue what I’m going to hear when a sailor or Marine walks into my office.”