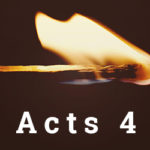 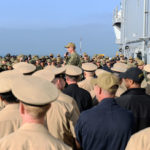 […]that end by using the senior positions and the spiritual gifts God provided to him. In November 1991, two Russian military officers attended an American OCF / CMF conference in Germany. They had been Christians for only a few years. They stated: “We believe that Jesus Christ can change our nation. Pray with us that it will happen.” An Army officer serving as an infantry brigade executive officer wrote from Saudi Arabia about the ways God was working in his division. He recalled his initial prayers when he had received orders to the division in the states: “I had asked […]
[…]right arm while shattering his left foot. Fifteen major surgeries and countless minor ones later, John has gone from “being unable to walk and even care for myself to going hiking and climbing in Colorado.” “John has pushed himself through pain and agony that I have never experienced, “said Joe. “Seeing him do things such as rappelling, rock climbing and backpacking during this time of his healing motivated me to give up sniveling and to persevere.” For Jeff Silliman, the personal joy of sharing with his mother “the impact of OCF’s ministry on our lives and also meet Mr. Tok” […] 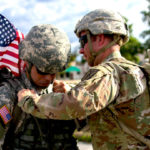 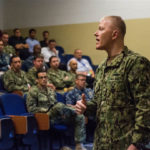 […]and to let their lights “shine before men” (Matt. 5:13-16). However, John cautions us in 1 John 2:15 to, “…not love the world or the things in the world.” John goes on to describe more specifically those things he is referring to. “…the lust of the flesh, the lust of the eyes, and the boastful pride of life” (1 John 2:16 NASB). Avoid these areas; but don’t isolate yourself so that you are no earthly good. Those under your command need to see your light. Don’t get trapped in the office. We lead people, not things. Do what is right […]
[…]Washington, D.C., during the Promise Keepers’ “Stand in the Gap” rally in October of 1997. It was a logistically challenging time to fund, transport, feed, and house a group of thirteen soldiers, but through some amazing answers to their prayers, it all worked out and they experienced a life-changing time together. Timothy concluded his testimony this way: “We made it back to Germany and, returning to our community, began to share with others our adventure in Christ, including those brothers of ours who had remained behind to accomplish other missions. I knew then, however, that our fellowship–not just those who […]