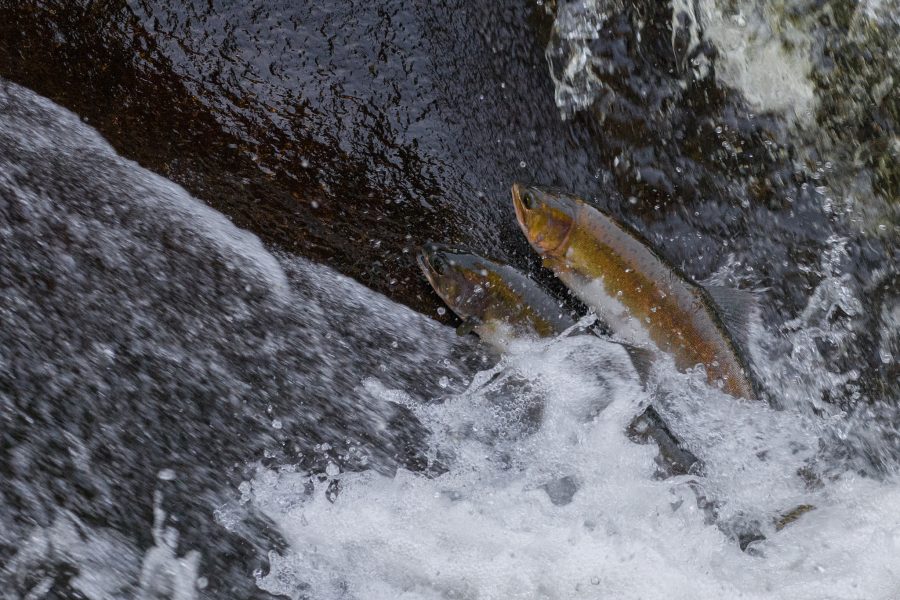 I am a U.S. Army Airborne-Ranger-Expert Infantryman. I’m tough. I have a personal discipline that carries me through the toughest training ordeals in cold Korean mountains, Panamanian jungles and dusty desert lakebeds in the Mojave. When I reach the point where one more step is impossible, I step anyway. That’s the kind of guy I am.

I am tough. Or so I thought.

I just came from the Fall Creek Hatchery on the Alsea River tributary in Western Oregon. I have heard about salmon runs, and I had seen them on television documentaries. I went with my wife, Monika, to see for myself. We took a sack lunch.

A mile downstream from the hatchery, I stopped the car and stepped out onto a knoll overlooking the stream twenty feet below. I was not sure what size or color fish I was looking for, and I saw only the water crashing down the falls on its twenty-mile journey from here to the sea. Monika and I went on.

We parked again at the hatchery and walked alongside the man-made stairs designed to assist the salmon on their way upstream. What did the fish do before we were here to assist them? Concrete steps, indeed. And fish with no legs. Seemed ridiculous. The stairs were obviously spaced too far apart, anyway, and the water was coming down too fast for the fish to get up this way. I went back to the stream; there had to be a path of lesser resistance. The salmon would find it.

But the river was blocked with a wooden grate. As I think about it now, it was like a cage, or bars, stretched across the full breadth of the river. The Chinook and Steelhead would have to use the steps. I went back to the steps and ate my sandwich. The first thrash sounded like someone had fallen into the water. I turned just fast enough to see the dorsal red of a fish through his translucent scales. Thirty pounds of salmon, airborne.

But what was I rooting for? A fish making the ultimate sacrifice. He had made the run downstream as a fingerling a year or two ago, adapted from fresh water to salt water then back again. In doing so, he fought not only the current but the tide of extinction, the over-fishing, and the wooden grates. In giving the white chunks of flesh from his battered and once-piked jaws to make the climb, he offered himself up for the perpetuation of his kind. He was running upstream to die.

This story should seem familiar. Christ was, arguably, the most potent rebel of his time. By speaking His name, Jesus caused an armed band of men and soldiers to fall back and drop to the ground when they came to arrest Him (John18: 3-6). Accusers claimed Christ’s followers turned the world upside down (Acts 17:6). Jesus Christ–symbolized by the Ichthus/Fish–swam against the tide of unbelief, the current of oppressors, and the grating of religious and political leaders to make the ultimate ultimate sacrifice. Heaven to earth and back to glory again.

We talk about tough, but we don’t know tough. Fresh water to salt water to fresh water to death. Here we are with our own free will settled between the common instinctive sacrifice of a salmon and the sublime volitional sacrifice of Christ. Yet, not many of us will be so single-minded in friendship or altruism or love that we will run to die, and work hard at it.