What Are Parents to Do?

Together we have experienced one fifteen-month deployment of our son, Captain Darren Riley, and are once again looking to God for His sovereign protection as Darren begins another deployment to a combat zone.

Yes, the anxiety is there, the unknowns are great, and we can do nothing about his situation–at least by ourselves. But we can, and do, seek God’s loving embrace of Darren and his unit, and pray unceasingly that God will grant them safety, good health, strength, courage, and success in their mission. He is truly in God’s hands now.

There were so many uncertainties as Darren began his first deployment. We were unsure of the environment and the type of operations he would be involved in. Our minds were full of questions: How would he do? Would he try to be a hero? Would he stay healthy? Would he have access to email or a phone?

We had some of these questions answered when we went to Fort Drum, New York, to bid him farewell and meet a few of his unit leaders. But anxiety remained. 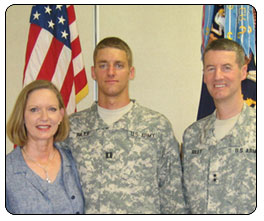 The two of us had very different feelings. Don was confident in the Army and Darren’s unit leaders, and, although concerned, felt great pride in knowing his son was going to fight for his country.

Roz was watching her child go off in to hostile territory. Who would protect him? She had nurtured and protected this child, hugged him when sad, encouraged him to discover new activities and interests, and watched with amazement as he enjoyed exploring new things. A different emotion swells and dwells in a mother’s heart when it is her son who marches off to battle than if it were her husband.

We did the only thing we could do–trust wholly in God. We daily claimed the promises of Psalm 91, parts of which we have posted in two locations in our home. We drew comfort from the words of David:

He who dwells in the shelter of the Most High will rest in the shadow of the Almighty. I will say of the Lord, ‘He is my refuge and my fortress, my God in Whom I trust.’

Even though television reports, radio alerts, news articles, and telephone calls would often startle us, we faithfully trusted in our all-sufficient Lord Jesus. Because Darren was stationed at a small patrol base in the mountains, he could only call or email us every few weeks.

Not knowing what might happen, and not wanting to think about the worst, we looked to God for comfort. We clung to Him even more as we learned that Darren was leading nightly patrols and experiencing frequent contact with enemy forces.

Surely he will save you from the fowler’s snare and from the deadly pestilence. He will cover you with his feathers, and under his wings you will find refuge; his faithfulness will be your shield and rampart.

When we received the very sad news that one of his closest friends was killed, we were overcome more by compassion–rather than fear–for the new widow, and for Darren. Although we were thankful the call we received wasn’t about Darren, we grieved. Don went to Dover Air Force Base for the repatriation of the remains, and we attended the memorial service, and the funeral at Arlington.

You will not fear the terror of night, nor the arrow that flies by day, nor the pestilence that stalks in the darkness, nor the plague that destroys at midday. A thousand may fall at your side, ten thousand at your right hand, but it will not come near you. You will only observe with your eyes and see the punishment of the wicked.

For Darren’s mid-tour leave, the only thing he wanted to do was join a summer retreat session at OCF’s Spring Canyon Conference Center in Colorado. We were overjoyed to be able to bring the entire family. Although the time with Darren was short, and we knew the return to Afghanistan would be mentally tough for a period, we remained excited to hear of his work and his challenges. And we prayed, and prayed, and prayed.

If you make the Most High your dwelling–even the Lord who is my refuge–then no harm will befall you, no disaster will come near your tent. For He will command His angels concerning you to guard you in all your ways; they will lift you up in their hands, so that you will not strike your foot against a stone.

Darren returned, and was disappointed to find out his platoon had fought some significant battles during his absence; so that made the reunion with his men more difficult. But he was soon back in the rhythm of daily weapons and equipment checks, soldier care and training, and continual patrols.

A few months later, however, we received a call from Darren–he was wounded during a firefight. Darren sounded weak but, by the grace of God, the wounds were not critical.

We didn’t take the news easily–unsettled by a mixture of fear and great thankfulness. We only wanted to physically be there with Darren, to comfort him, protect him, and suffer with him. But we couldn’t. We trusted in God, and three weeks later he returned to his platoon where he wanted to be.

For Christmas, Darren revealed his heart by asking us to only send him used clothing that he could pass out to the poor villagers. We energized a lot of help for this, and Darren finally had to ask that we stop–the response from family and friends was overwhelming.

Don did not miss a day praying on his knees, early each morning, claiming the precious words of Psalm 91. Nights, however, were sometimes tougher than the days. Roz would frequently wake up in the middle of the night, compelled by the Holy Spirit to pray.

Also Darren would often find his only time to call us was late at night our time. We, of course, would wake up and gladly listen and talk, pray with him, say good-bye, and pray again. As time went on we had fewer restless nights as we learned to lay even more of our parents’ burden at God’s feet.

Darren’s homecoming was filled with a joy beyond description, a peace that passes understanding, and the pride that only a parent can feel. We were excited to see him, hug him, and hear of his experience–and how he, too, had placed his faith in God.

And it was only with a small twinge of disappointment, but also enormous satisfaction in the way we raised him, to hear him say he “wouldn’t mind going back again.” He did not feel himself a hero, but humbly took satisfaction in doing his duty and helping the people, whom he came to love.

‘Because He loves me’ says the Lord, ‘I will rescue him; I will protect him, for he acknowledges my name. He will call upon me, and I will answer him; I will be with him in trouble, I will deliver him and honor him. With long life I will satisfy him and show him my salvation.’