For countless men and women of the U.S. Armed Forces, Spring Canyon Conference Center has long been a “home away from home,” a stable, welcoming place providing them a brief respite from their demanding military lives. Through outdoor activities and biblically based teaching, OCF’s oldest affiliated conference center—which is celebrating its 60th anniversary this year—has refreshed, equipped, and encouraged countless singles, couples, families, and friends of the military.

According to Spring Canyon’s Director of Operations Todd Plotner, “the ‘official’ week of celebrating the 60th anniversary will be Summer Celebration Week 5 (2-9 July).” Saturday, 2 July, is the date of the actual celebration. For that day, “we are trying to line up a series of guest speakers from Spring Canyon’s history who can speak to the legacy of this great ministry,” said Todd.

“Every week of summer will include at least some recognition of the 60th anniversary and will include all our summer programs—Summer Celebration, Rocky Mountain High, and Father-Teen Adventure,” he added.

Some of the tentative ideas and activities being discussed include dedicating facilities, a formal naming of the Guide Quarters, retro games from the 1960s, and an anniversary cake during the summer retreat weeks to recognize guest birthdays and anniversaries. 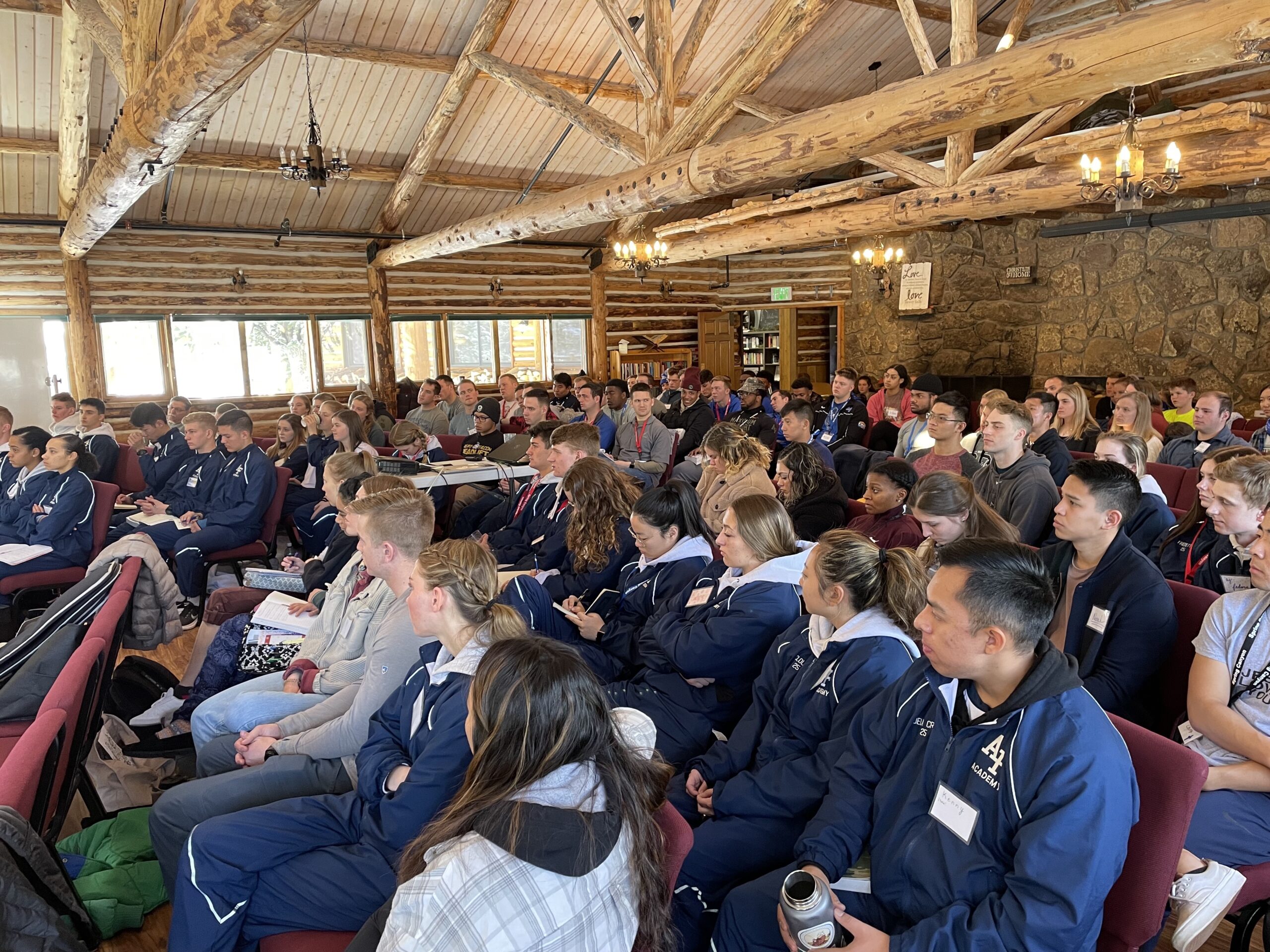 Much like its namesake spring that continuously pours out life-sustaining water that flows through the heart of the camp, the heart of Spring Canyon’s mission is to offer and help its guests drink deeply from the life-giving water that is Jesus Christ (John 4:14).

COL Gwynn Vaughan, USA (Ret.), is among the first of countless people whose lives have been indelibly impacted by ministry efforts at Spring Canyon. A West Point cadet at the time, seeking “adventure and spiritual encouragement,” Vaughan first visited the conference center with his parents, siblings, and a couple of West Point classmates during its inaugural summer season in 1962.

“Spring Canyon was special because we got away to a gorgeous landscape of streams, lakes, mountains, and forests that made us realize the beauty of God’s creation. There we could refresh our walk with God,” said Gwynn, who recalls staying in “Pioneer Lodge in a sleeping bag” and climbing “the Hook,” the prominent lower peak of Mt. Princeton that towers above the camp.

Fast forward to present day and the “Welcome Home” sign at the entrance of Spring Canyon still has a way of making one feel like their presence at Spring Canyon is cherished before they even check in. Such was the sentiment of 2d Lt Esther Moats, USAF, when she was driving into Spring Canyon for the first time.

“The beauty is truly breathtaking,” said Esther. “I remember taking in the scenery and being so excited about the opportunity to spend time in God’s creation, away from my normal daily stressors, surrounded by fellow brothers and sisters in arms and in Christ.”

The inspiration for a ministry-owned conference center was birthed out of the then-Officers’ Christian Union’s retreat programs already taking place in the late 1950s nationally and in other locations such as conferences in Germany—or on canoe trips.

Cleo Buxton, OCF’s first executive director, who shared Jesus Christ as a speaker at seminars or while paddling rivers with cadets and midshipmen in a canoe, envisioned a ministry-owned retreat facility for leadership training and “building up the believer, [and] evangelizing the nonbeliever.”

OCF leaders became aware in 1960 of the availability of Spring Canyon—a few cabins and a simple main lodge on a 100-plus-acre parcel—outside of Buena Vista, Colo. The Rocky Mountain Association for Christian Training (ROACT) was formed to purchase the property (and later sold the property to OCF in 1988) and gave OCU first-rights use of the property. Two years later, with Christ-based OCU retreats at Spring Canyon made available to the military community, word quickly spread.

“I made plans to visit there,” said Kit Vaughan, who had attended the first International OCU Conference in Germany at the invitation of COL Granville  Sharpe, USA, and his wife who had also led the teen to Christ. “Mrs. Sharpe wrote me that her husband was speaking at Spring Canyon. If it was anything like the international conference, it would be amazing. I was not disappointed.”

“Louisa Buxton did all of the cooking. After dinner, we took turns doing the dishes. Buck (Cleo) led the programs. He would read all of us a chapter from Jungle Doctor (about a medical missionary’s adventures in Africa),” said Kit. “When Gwynn and I had our own family, we read Jungle Doctor to our children before bed time.”

‘Vacation with a purpose’

Spring Canyon’s sanctuary status—considered “our Bethel” by the Vaughans—also became regarded as a home to many in the ever-transient military community. Kim and Kari Ann Hawthorne are one such military couple. Serving now as the director couple at Spring Canyon, they know and have tasted first-hand what the ministry has made available to other peers in uniform for six decades.

“As we moved around the world for 28 years, Spring Canyon became our home away from home in what was sometimes a turbulent journey,” said Kim. “We have watched our family grow up, grow closer together, and grow closer to God at ‘The Canyon.’”

The Hawthornes enjoy a deeply rooted family heritage there, starting in 1969 when Kari Ann attended Spring Canyon with her parents, COL Don and Karen Martin, USAR (Ret.), whose longtime service in OCF includes a stint at Spring Canyon. Kim first visited Spring Canyon as USAFA cadet in 1982, and later met and married Kari Ann there. Their children, Ki, Erin, and Amy Grace, served on staff at the center and later followed their parents’ footsteps by marrying their respective spouses there as well.

For the Hawthornes, with their profound family heritage flowing out of Spring Canyon’s ministry efforts, the enormity of shepherding the center during its 60th anniversary is particularly poignant.

“It’s an honor and a sacred trust to be the ‘Keepers of the Spring’ as we celebrate the 60-year legacy of God’s work through this ministry,” said Kim. “We are thankful to follow in the footsteps of giants and for the opportunity to continue to serve the generations who follow.”

The programs and activities of Spring Canyon are also intended to help support OCF’s goal of equipping those who attend—and “have experienced God’s presence and tasted of His living water”—to serve God as Christlike leaders. Hence, Kim calls time spent at Spring Canyon as “a vacation with a purpose.”

It was at Spring Canyon’s Rocky Mountain High (RMH) program that Esther Moats came to understand what “vacation with a purpose” can mean.

“Going to RMH as a newly commissioned lieutenant really helped confirm my calling to serve in the profession of arms, while encouraging me in faith,” said Esther, who has been at the retreat center three times.

“The most significant experience I had there was when I attended the OCF Leading Women’s Conference last fall. I remember for the first time ever being surrounded by godly women who understood a struggle I had been trying to navigate for the past five years (as a cadet and as a female officer),” she said. “Being surrounded by eager young female cadets who want to honor God in their lives and future military careers, along with experienced female officers who have honored God in their lives and military careers, was so inspiring!”

Said Kim, “Throughout the years, we’ve experienced a ‘vacation with a purpose,’ and have reconnected in the Rockies with friends, family, and most importantly with God. Like our family, you likely have been blessed by this ministry! During this season of celebration, we encourage you to share your experiences at Spring Canyon with the next generation. We are confident that adventure awaits!”

The Spring Canyon experience, from taking part “across the spectrum of incredible ministry at SC through RMH, FTA, and various retreats,” is something Col Scott Fisher, USAF (Ret.), OCF’s executive director deeply desires for others as the center marches into its next 60 years of ministry.

“My prayer is simply that an ever-increasing number of service members and their families will experience Spring Canyon as a place of refuge where they are encouraged, equipped, and emboldened to live out the life to which God has called them with obedience and passion,” said Scott.

“I’m thankful that 60 years ago, Cleo and Louisa Buxton were willing to sacrifice so much so we could have this beautiful ‘Bethel’ to come to for refreshment and inspiration,” said Kit. “I wish they were here to see how much the military folks love and appreciate what they did for us.”